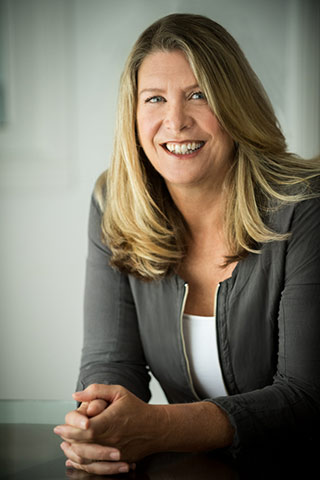 Teri Schindler is co-founder and CEO of Herzog & Schindler, bringing decades of experience in producing award-winning content and creating innovative marketing and business strategies to the firm.

As a writer, director, and producer, Ms. Schindler worked for NBC, CBS, HBO, and ESPN. Early in her career she was a key member of the Big East Television Network that set a standard for developing content for target distribution in select markets. The group was bought by ESPN. She went on to produce live events and documentary features for a variety of networks, including the NBC Olympics Unit where she won an Emmy for her work in 2000 in Sydney, Australia. She was the first woman to produce live NCAA network broadcasts.

At the NBA, Ms. Schindler worked under current Commissioner Adam Silver as Vice-President of Programming and Production. She distributed live NBA broadcast and digital content to over 400 countries, as well as being a founding member of the WNBA. She oversaw hundreds of hours of original and live programming for the league and spearheaded key sponsorships, strategic marketing programs, and digital initiatives for both the NBA and the WNBA. She then joined Davis Brand Capital, becoming its president and working with Fortune 100 clients on brand and digital strategies across sectors including the sciences, consumer products, food and beverage, media, and entertainment. She had a longstanding collaboration and was a DARPA performer with MIT Media Lab’s Fathom Information Design, developing innovative data visualizations and applications. She went on to form Herzog & Schindler, which is focused on the platform-driven convergence of brand, content, and distribution. Ms. Schindler attended the University of Notre Dame, where she graduated Phi Beta Kappa and was an All-American swimmer, and the Aix-Marseilles University in France.